SYRIA: Who are Assad’s fascist supporters? 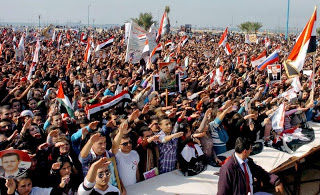 From Black Lilly blog, presumed to be a rally in Greece

The Assad regime has won the support of fascists and far-right nationalist parties and organizations across Europe. These include the National Front (France), Forza Nuova and CasaPound (Italy), Golden Dawn and Black Lilly (Greece), the British National Party (UK) and the National Rebirth of Poland, Falanga and All Polish Youth (Poland).

This support can be attributed to: anti-imperialist/anti-globalism sentiment with a strong focus on national states (they believe the Assad regime protects the Syrian state against US imperialism), Islamophobia (they believe the Assad regime fights Islamic extremists), anti-semitism (they believe Assad’s regime acts as resistance to Israel). All of these beliefs rest on fallacy and an uncritical perpetuation of regime narratives.[1] They are also positions shared (although without the racist element) by sections of the left. Another reason is likely to be concern about increased Arab migration to Europe where fascists in a number of countries have protested against and harassed Syrian refugees.[2]

Some of these groups have a history of support for the Assad regime but recently the support has been more visible. Fascist groups from Europe have traveled to Syria in solidarity with Syria’s tyrant and to carry out what they call “fact-finding missions”. In June 2013, a delegation of far-right and nationalist European politicians traveled on an officially sponsored visit to Damascus. Nick Griffin leader the British National Party (BNP) was one of the members of this delegation who found that  apart from “occasional explosions”, life in Damascus was “normal”. He also praised the militant, sectarian, Jihadi group Hizbullah for their role in supporting the regime.[3] The BNP’s policies include: re-introducing corporal and capital punishment for certain crimes, abolishing anti-discrimination laws, making an agreement with the Muslim world “to take back their excess population which is currently colonising this country/[the UK]”, deporting all illegal migrants and those who commit crimes if their original nationality is not British, and rejecting all asylum seekers who passed through safe countries before arriving in Britain.[4] They have taken part in violent anti-Muslim protests and racist attacks.[5] Other members of the delegation included far right Parliament and European Parliament members from Poland, Russia and Belgium.[6]

Also in June, Polish fascists from Falanga travelled on a solidarity mission to Syria and met with the Syrian Prime Minister Wael Al Halqi and Deputy Foreign Minister Faisal Mekdad in Damascus. In Beirut they met with representatives from the Syrian Social Nationalist Party, a fascist party.[7] Falanga is a group which advocates stripping Polish Jews of their citizenship rights and has attacked Jews and their businesses. Activists from the neo-nazi All Polish Youth have held demonstrations in support of Assad on the invite of the Syrian Embassy in Poland.[8]

The European Solidarity Front is another group which, whilst not openly fascist, has strong fascist connections. It has been active in the anti-war protests for Syria across Europe. Founded in January 2013 it states that: “The European Solidarity Front is open to all those who love Syria, and support solidarity with President Assad, the Syrian nation and its army. The main founders of this project are from Italy, Greece, Cyprus, Belgium, the Netherlands, Finland and Spain, but we quickly found enthusiastic support from a number of militants activate in different countries, and more specifically in Poland, France , Czech Republic, Romania, Ireland, Serbia, Great Britain, Scotland, Malta, Ukraine, Denmark, Sweden, Canada and Argentina.”[9] As well as organizing protests in support of Syria’s dictator they also organize conferences. In Italy these have been hosted by CasaPound, an Italian fascist organization that expresses admiration for former dictator Mussolini, has carried out racist protests against the Roma community and violent attacks on anti fascists and leftists.[10] The ESF also invites speakers such as Belgian Third Positionist Ruben Sosiers to their conferences. Their common cause is the fight against “Western Imperialist Propaganda”.[11] Poland’s largest fascist organization National Rebirth of Poland, that recently carried out this attack on an antifa squat in Warsaw and attacks homosexuals, are also part of the European Solidarity Front.[12] It has been suggested that the ESF may get direct financial support from the Syrian government as “hundreds of flags, posters, and flights to Syria don’t pay for themselves ”.[13] Further this network of European fascists may use the situation in Syria as a key method of fundraising as such groups “are able to gain greater resources through their Syria campaign than they are usually capable of mustering.”[14] 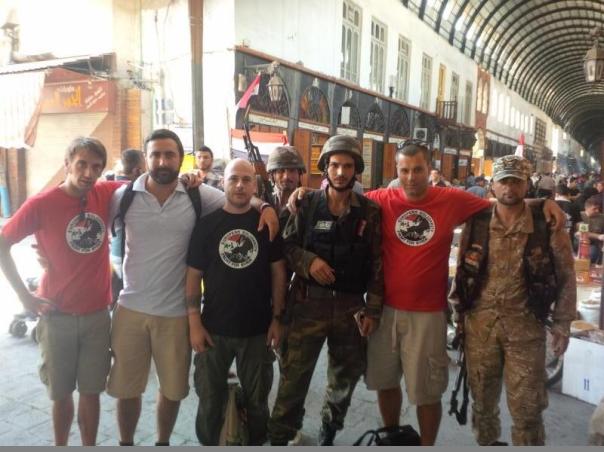 Italian delegation of the European Solidarity Front with Syrian Army soldiers in Damascus. From ESF website

Between 30 August and 9 September 2013, an Italian delegation from the European Solidarity Front for Syria travelled to Damascus and Tartus, which they describe as “the most important Russian center in the Mediterranean sea and the fortress of Assad’s government”. Their trip was “in support of the legitimate government of Bashar Al Assad and the Syrian people.” During their trip they also met with the Syrian Prime Minister and Deputy Foreign Minister. A video of their trip (in Italian) is here.  They were also part of the delegation that met with Wissam Samira from the Syrian Social-Nationalist Party, alongside Polish fascists in June.[15]

Greek fascists, from Black Lilly (Mavros Krinos), have gone one step further and have fighters on the ground in Syria and claim to have fought alongside Hizbullah and Assad forces in the brutal assault on Qusayr.[16]  Black Lilly is an autonomous nationalist organization which combines aspects of anarchism with extremist far right ideology. They also claim that “thousands of Russians, Ukranians and Poles” from fascist groups have “declared themselves ready to fight alongside ‘The Lion of Syria’ i.e. Bashar al-Assad”.[17] Black Lilly are also part of the European Solidarity Front for Syria.[18]

[1] Assad rhetoric to justify the Syrian regime and its oppression of Syrian citizens is not matched by reality. Whilst the Syrian regime has been an vocal opponent of the US policy in the region, it has also cooperated with the US when in its own interests – such as participating with the US in the first Gulf War on Iraq, as well as Bashar Al Assad’s cooperation with the US’s illegal rendition programme.  Militant Jihadi groups have infiltrated Syria since the uprising began, but the regime has done little to oppose them and even released many militant Jihadis from prison at the beginning of the uprising. The overwhelmingly majority of prisoners currently in Assad’s jails are secular, non-violent, civil activists. Moreover, military attacks carried out by the regime mainly target civilian areas or areas under control of the Free Syrian Army (FSA) while the strongholds and headquarters of ISIS and JAN (Al Qaeda affiliated groups) are spared. It is the grassroots civil opposition and the FSA that have provided most opposition to militant Jihadi groups. There has also been little evidence beyond rhetoric of the Syrian regime’s resistance to Israel. Not only has the Syrian regime never carried out attacks on Israel (even in retaliation for Israeli aggression) it has also brutally repressed Palestinian liberation movements. In fact it seems that the sole purpose of the regimes “war with Israel” was to justify the continued application of Emergency Law which stripped Syrian citizens of their rights and gave unlimited powers to security forces.

[9] Italian page of the European Solidarity Front, ‘Who we are’ section, http://www.frontesiria.org/?page_id=60