← FRANCE: Why Euro 2016 is a festival of cash and football business
GREECE:Europe’s solidarity crisis: a perspective from Greece → 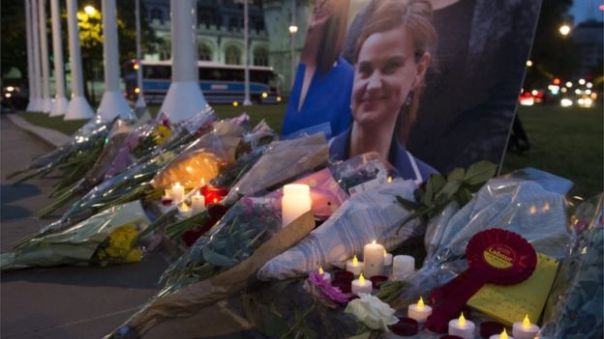 Yesterday, after a constituency surgery at the library in Birstall, neer Leeds, Labour MP Jo Cox was subjected to a targeted, brutal and prolonged attack by an assailant who,     according to multiple eyewitness accounts, shouted the words “Britain First” as he attacked, shooting and stabbing her multiple times. By the evening, news broke that Jo had died as a result of her injuries.

Evidence is mounting that the 52-year-old man detained near the scene was inspired by, and involved in, far-right activity over a number of years. He shouted “Britain First”, the name of an extreme right-wing, racist and anti-immigration political organisation both during the attack, and as he was being apprehended. The Southern Poverty Law Centre has uncovered evidence that he was a regular donor and supporter of NationalAlliance, an American neo-Nazi group. Other records obtained by SPLC show that he ordered literature describing the construction of improvised weapons like the one witnesses describe was used to murder Jo. He also subscribed to the S.A. Patriot, a racist publication dedicated to supporting apartheid.

The national media has been quick to paint a humanising picture of the assailant, who has been named as Thomas Mair, as a quiet man, a loner; someone who enjoys gardening and volunteering. Particular emphasis has been placed on his history of mental illness. We take issue with this for a few reasons. As Tommy’s involvement with the far-right is long-standing – records of his purchases of neo-Nazi literature date back to at least 1999 – we feel that this was nonetheless a premeditated political assassination. Further, we feel that the blanket application of “mental illness” as a causal factor in this case stigmatises and demeans those who suffer from mental health problems.

Finally, it is telling to compare the immediate coverage of this case with that of Lee Rigby’s murder in Woolwich, which was immediately trumpeted as an act of terror. Both attacks were extraordinary in their brutality, perpetrated against unsuspecting victims in broad daylight, and with apparent political motives. Islamist terrorism and White Nationalist terrorism are very much alike in their goals, turning discontent and anger into reactionary violence. The difference in the way these two murders have been reported speaks to a racial and religious bias on the part of the mainstream media in the UK.

It is no great surprise that the newspapers who systematically foment hatred against migrants and refugees to influence the outcome of the referendum, would seek to deflect criticism of their coverage once a pro-refugee humanitarian, and visible ‘Stronger In’ campaigner, is murdered. Jo’s death is being robbed of its political context by those same media outlets. It can not be ignored that this murder occurred against a background of an increasingly febrile and racially-charged campaign around the EU referendum. The right-wing media, UKIP and the official Leave campaign have blood on their collective hands. Aware that their economic arguments were not generating enough support, they have made the calculated move of denigrating and demonising migrants, whipping up fear and hatred to bolster their vote, with no regard for the effects on social cohesion. ‘Vote Leave’ have also provided a platform for long-forgotten racists such as Mark Collett, ex-BNP Youth organiser, to rear their ugly heads once more – espousing fascism from their stalls in Leeds City Centre, until they were challenged by Leeds Anti-Fascist Network, and stopped turning up.

Jo’s murder reflects a pattern of increased violence from an emboldened far-right movement which has recently reverted to type, launching bloody attacks in the UK and overseas. Last year, Zack Davies of the neo-Nazi outfit National Action attempted to behead a Sikh man in Tesco “because he looked Asian,” citing revenge for Lee Rigby’s murder. Dylann Roof, inspired by apartheid-era South Africa and the Confederate South and having posed with the flags of each, walked into Emanuel African Methodist Episcopal Church and shot nine black worshipers dead at a bible study. Earlier this year, hooligans professing support for Combat 18 and the Chelsea Headhunters attacked anti-racist activists at Maidstone service station, and a French man with nationalist sympathies was recently caught in the Ukraine, smuggling weapons for a planned attack during the Euro 2016 tournament. As Europe braces itself for attacks from ISIS, it forgets too easily the ever-present threat of far-right/nationalist violence and terror. In the aftermath of yesterday’s attack, online comments from Nottingham Casual Infidels, another Islamophobic and racist group, praised the attacker stating that it was about time someone “took it to the next level,” warning “now is the time.”

Fascism is an ideology that feeds off the genuine concerns of working class communities – low pay, the housing crisis, a lack of control and self-determination – and places the blame at the feet of smaller disadvantaged groups, such as migrants, people of colour, minority faiths, the LGBT community, etc. It is capitalism’s great trick of misdirection – urging us to fight amongst ourselves instead of against the powers that oppress us all, with frequent tragic results. Fascism must be opposed whenever and wherever it appears: only through strong and determined working class organisation can we defeat hate, defeat poverty, and fight for a better life for all.

Leeds Anti-Fascist Network stands in solidarity with Jo and all victims of fascist violence, and is committed to direct opposition to fascism.

← FRANCE: Why Euro 2016 is a festival of cash and football business
GREECE:Europe’s solidarity crisis: a perspective from Greece →