The organization abbreviated as ISIS (Islamic State in Iraq and Syria) is not new in the region, nor is it a newfound expression of the crises afflicting Arab societies at a moment of profound transformations, initiated by 2011 revolutions.

To the contrary, ISIS is the offspring of more than one father, and the product of more than one longstanding and widespread sickness. The organization’s explosive growth today is in fact the result of previously existing, worsening conflicts that were caused by the different fathers. END_OF_DOCUMENT_TOKEN_TO_BE_REPLACED

Tunisia, with a strong feminist movement for over a hundred years, is often considered the most advanced in terms of women’s rights among countries of the Muslim world. Since 1957, the Personal Status Code recognizes the rights of women, such as abortion, contraception and the right to education. Although the Tunisian feminist movements have allowed for these advances, the status of women, as in many places on the globe, is still far from anarchist ideals. Nothing new under the sun of male domination: women are still seen as mothers and wives before citizens . After a few days in, it is easy to see how the judgment of others and fear of compromising a reputation may hinder the engagement and activism of women. There are currently at least three feminist collectives in Tunisia:

Democratic Women, a group consisting of bourgeois who gather themselves without political purpose or claims, Femen, recognized in Tunisia for their struggle (their actions, however, do not induce unanimous approval), and Feminism Attack, a self-managed and self-funded collective movement, whose members have an average age of about 20 years. It is inspired by anarchist ideas to search for radical solutions to social and political problems, and the dangers that threaten the position of women in society.

END_OF_DOCUMENT_TOKEN_TO_BE_REPLACED

SYRIA: The Rise of Al Qaeda in Syria: Separating Fact from Mythology

By Leila Al Shami for Tahrir-ICN

One of the most worrying developments during the trajectory of Syria’s revolution has been the rise of militant Jihadi groups. The danger that the increasing strength of such groups poses to both Syria and the region should not be underestimated. Yet a lot of misunderstandings exist about the nature and dominance of such groups which this article attempts to address. Only when fact is separated from mythology are we able to move forward collectively towards a strategy that addresses the threat of counter-revolutionary forces and have a better understanding of who is working for the original goals of the revolution so that they can be given the solidarity they deserve. END_OF_DOCUMENT_TOKEN_TO_BE_REPLACED

SYRIA: Should we listen more?

Syrian Liberation Front and Syrian Islamic front are Muslim Brotherhood Brigades. Independent Brigade Alliances and the Independent battalions are brigades that position with the Free Syrian Army Chiefs of staff of the military council but reject National Coalition.

Why are some people in the West so eager to believe it’s the “rebels” who were responsible for the recent chemical weapons attack? END_OF_DOCUMENT_TOKEN_TO_BE_REPLACED

EGYPT: Anarchism in Egypt, after the Brotherhood

The morning after the June 30 uprising that brought down Mohammed Morsi, I did an interview with Mohammed Hassan Aazab as he helped hold down four anarchist tents in one of Cairo’s major sit-ins. Shortly thereafter, the military stepped in, removed Morsi from office, and set about rounding up Islamists and shuttering media outlets deemed to be partial to the Muslim Brotherhood. In some cases they shot party members under arrest, even massacring a number of supporters during prayers. Islamists have responded by blocking the airport road and carrying out low-scale warfare in scattered parts of the country. END_OF_DOCUMENT_TOKEN_TO_BE_REPLACED

EGYPT: Down with Military Rule…Again?

[“Down with military rule” and “Muslim Brotherhood are the enemies of the nation” written on the walls of the al-Qubba Presidential Palace. 2 July 2013. Photo by Alaa Abd El Fattah]

Millions of Egyptians are continuing to take to the streets. They are calling on President Mohamed Morsi to resign and to hold early presidential elections. At the same time many express concern about the army’s 1 July statement and the potential for a return to military rule at the hands of the Supreme Council of Armed Forces (SCAF). The statement said that SCAF would impose its own “roadmap” to exit the current impasse if no solutions surface in the next forty-eight hours: END_OF_DOCUMENT_TOKEN_TO_BE_REPLACED

EGYPT: Anarchism in Egypt — an interview from Tahrir Square

I met Mohammed Hassan Aazab earlier this year over tea at a table of young anarchists in downtown Cairo. The anniversary of the revolution had just passed with massive protests and the emergence of a Western-style black bloc that appeared to have little to do with anarchists in the city. At the time, much of the ongoing grassroots organizing was against sexual violence — in particular, the mob sexual assaults that have become synonymous with any large gathering in Tahrir. The trauma of such violence carried out against protesters was apparent in our conversation. In fact, Aazab told me that he was done with protests and politics, and had resigned himself to the dysfunction of day-to-day life in Egypt. END_OF_DOCUMENT_TOKEN_TO_BE_REPLACED

ALGERIA twenty years on: words do not die

This year marks the twentieth anniversary of the Algerian jihadists war on culture. Those who waged the intellectual struggle against fundamentalism in Algeria throughout the 1990s received little support internationally. Karima Bennoune pays tribute to those who fell in the culturicide, and warns of the urgent need to remember. 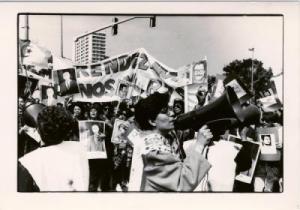 Women protest killings in Algiers on March 22, 1994, carrying the
picture of Tahar Djaout, among others. Photo: El Watan

END_OF_DOCUMENT_TOKEN_TO_BE_REPLACED

EGYPT: All Unionized and Nowhere to Go

Decree 97 of November 25, 2012 went virtually unnoticed in the political upheaval following President Morsi’s November 22 constitutional declaration which granted him almost dictatorial powers. Decree 97 amended the law regulating trade unions and removed all office holders of the state-sponsored Egyptian Federation of Trade Unions (ETUF) over 60 years old. They are to be replaced by candidates who received the second-largest vote tally in the 2006 national union elections—widely considered exceptionally corrupt. In August 2011, the Ministry of Manpower and Immigration certified their invalidation and dissolved the ETUF’s executive board. END_OF_DOCUMENT_TOKEN_TO_BE_REPLACED