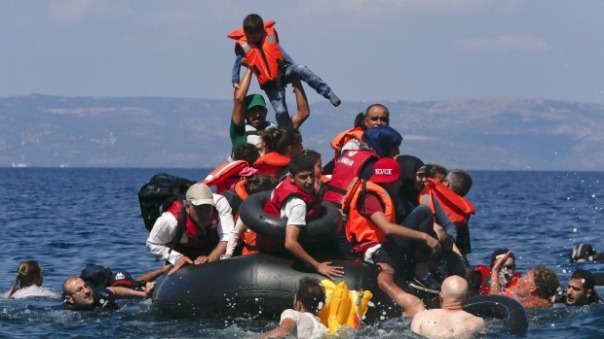 END_OF_DOCUMENT_TOKEN_TO_BE_REPLACED

GREECE/SYRIA: Statement by SRSB in solidarity with struggle against dumping of chemical weapons in the Mediterranean sea 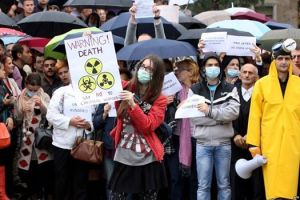 Protests in Crete continue against the destruction of the Syrian regime’s chemical weapons in the Mediterranean sea. The United States, Russia and the United Nations wanted to get rid of the Syrian regime’s chemical weapons and did not mind turning the Mediterranean sea into a waste dump for toxic agents.
The process of burying the Syrian regime’s chemical weapons in international waters between Malta, Greece and Italy has already begun, but local communities are not watching this idly.
On 23 March, almost 10,000 Cretans rallied in the tiny village of Arkadi against the plan to dump the chemical weapons in the Mediterranean.  An international online petition has been issued to demand a a halt to process that poses catastrophic ramifications on the marine ecosystem.  On 25 July, a flotilla of three boats carrying about 30 fishermen, activists and scientists attempted to sail to prevent the destruction of the chemical weapons aboard the US vessel MV Cape Ray. The flotilla, however, was derailed by bad weather and high waves. Protests took place in Italy, too. Some of the Majors of Gioia Tauro protested outside the parliament against the arrival of chemical weapons in their port. Activists from Crete said: “If you don’t fight you won’t achieve anything. If you fight, you might achieve something.” And now more than ever, it’s our duty to support their fight and reject the destruction of Assad’s weapons in our sea. END_OF_DOCUMENT_TOKEN_TO_BE_REPLACED 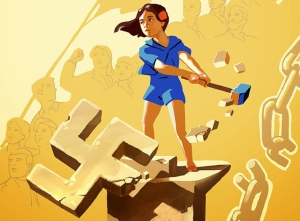 The far right is a hot topic right now and Chrissi Avgi\Golden Dawn (GD) are increasingly making headlines all over Europe, as this recently small neo-Nazi group suddenly stumbles onto the political stage; rabid and unclean compared to many of its European cousins, punching and threatening and speaking of civil war whilst for a long time no one does anything even though migrants and other undesirables are beaten and killed, and the cops are participating actively or at least not preventing it as the government tries its best to do even better in its own bureaucratic way. The murder of the antifascist Pavlos Fyssas by a GD member has created a sharp u-turn that recently saw surprised members of GD marching on their own as cops busted in on them and the state went antifascist. I have chosen the term ‘far-right’ to act as a massive umbrella term under which fascists, Nazis, xenophobic populists and nationalists can be categorised. I know that this is a simplification, but simplification is necessary if one is to talk about a new political climate which is spreading over Europe, a climate which is created by many groups with differing backgrounds and ideologies but which most significantly is characterised by racism and cultural protectionism. When analysing Golden Dawn it is relevant to look at Greek history as well as the ideologies of fascism and national socialism, but the international context is also important. If we look at international connections between GD and other far right groups, we can narrow our definitions, because we find the solidarity coming from a very specific political grouping: the neo-Nazis. END_OF_DOCUMENT_TOKEN_TO_BE_REPLACED

The current state of -permanent- exception, that constitutes an attempt to pave the way to yet another developmental invasion by the capital, unleashes an onslaught against almost all working people, confirming that class war is not only raging but is also becoming more extreme. States have always been instruments of class rule; the state is a system of social organisation that aims to reconcile the historically irreconcilable contradictions between exploiters and the exploited.
The unpopular government policy, perfectly aligned with their bosses’ (EU, IMF) orders, aims at the unconditional surrender of the contemporary working class and its decommissioning of each conquest of the past in order to make it even more exploitable, even more profitable for capital. More than any other period, the political system is acting on behalf of the transnational economic elite serving its interests. It’s acting on behalf of bank colossus, loan-shark states, serving, and facilitating, the economy of the markets and global capital. END_OF_DOCUMENT_TOKEN_TO_BE_REPLACED

GREECE: Interview with a comrade from Evangelismos Squat, Crete 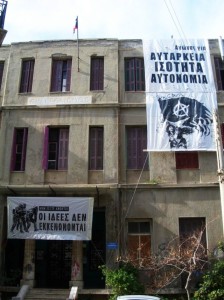 Greece has a long history of anti-authoritarian struggle that has provided inspiration for anarchists across the globe. Recently, I spent time in Greece to learn from comrades there about their experiences in anti-authoritarian organization and in particular establishing squats and self-organized spaces as centers of resistance, or autonomous zones. What follows is an interview with Carpe diem, from Evangelismos squat in Heraklion, Crete. END_OF_DOCUMENT_TOKEN_TO_BE_REPLACED

GREECE: rise of the party, demise of the movement?

by Leonidas Oikonomakis on November 25, 2013

The direct democracy of the squares has given way to representative party politics — a dangerous development, the Latin American experience teaches us.

END_OF_DOCUMENT_TOKEN_TO_BE_REPLACED

GREECE: When the State turns Antifa

Golden Dawn (GD), as we knew it, is over. Their leader N. Michaloliakos is behind bars, along with other prominent members, while those who survived the first purge are facing added charges that emerged a few days after the first arrests. While this was happening, a number of their offices around Greece have closed down, the state funding they received has been stopped, and reports indicate that many of their members (ex or current) are forming lines outside the High Court to testify against the organization. These testimonies are used as key evidence in the legal proceedings, leading among other things to the finding of hidden weapons[1]. Even if the legal case does not bring most of GD’s members to prison, the inside fighting is bound to create enough damage to forbid the Nazi party from continuing as it has.  END_OF_DOCUMENT_TOKEN_TO_BE_REPLACED

After the fatal stabbing of Pavlos Fyssas in Nikea (Athens) by Giorgos Roupakias (a member of the neo-nazi party Golden Dawn, organizer and coordinator of the party’s blackshirts’), mass demonstrations took place across the country. A few days later the conservative government launches crackdown on GD, resulting to the prosecution of party leader Nikolaos Michaloliakos and five other Golden Dawn MPs, who are charged with murder,sex trafficking, money laundering, benefit and tax fraud. But it was only two weeks ago that government officials and members of the ruling coalition government were openly discussing the possibilities of a future collaboration with the far-right party whilst for many years the Greek State was deliberately tolerating the proliferation of neo-Nazi violence against immigrants and leftists. END_OF_DOCUMENT_TOKEN_TO_BE_REPLACED

GREECE: Crackdown on the Golden Dawn

With the arrest of several party leaders the Greek government has begun a crackdown on the far-right Golden Dawn in the wake of the murder of Pavlos Fyssas.
END_OF_DOCUMENT_TOKEN_TO_BE_REPLACED

GREECE/SYRIA: The Greek Nationalist Socialists that are fighting alongside Asaad’s regime are far more dangerous than Golden Dawn

Believe it or not there is a far more dangerous extreme right group in Greece besides Golden Dawn. It’s name is Black Lily and they are a Nationalist Socialist organisation that organise themselves in a non hierarchical, horizontal, democratic platform structure but without  democratic aims or ideas in mind!!
A little insight on them can be read in the following interview contacted a couple of months ago by a journalist for the right/far right Greek daily “Democratia”!