EGYPT: Cracking down on dissent: The fascist State and persecution of political opponents 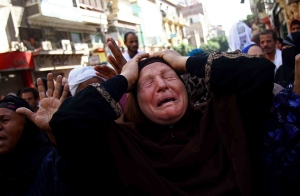 By Leila Al Shami for Tahrir-ICN

Since the July coup the fascist military regime in Egypt has continued to persecute political opponents. Those who have faced the worst repression of the State have been Muslim Brotherhood supporters, but also affected have been anarchists, leftist activists, workers, journalists and civil organizations.

Today (28 April 2014) an Egyptian court in Minya sentenced 683 alleged supporters of the Muslim Brotherhood to death, including leading members of the Muslim Brotherhood. They were found guilty of attacking the Adawa police station in August and killing a policeman following the violent dispersal of the pro-Morsi sit-ins in Nahda and Rabaa Squares. Last month 529 Muslim Brotherhood supporters were sentenced to death for attacking a police station in the same province despite evidence that many defendants were not present at the scene on the day in question and despite claims by some defendants that they are not Brotherhood supporters. 492 of the March death sentences have now been commuted to life imprisonment. END_OF_DOCUMENT_TOKEN_TO_BE_REPLACED

EGYPT: Dead end: about the coup in Egypt 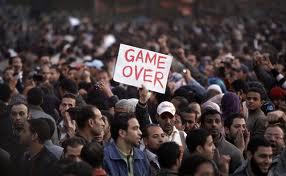 Article by the Wildcat collective on the background and current developments of class struggle in Egypt after the military coup in summer 2013 with additional focus on the situation of migrant workers in the Gulf states.

Dead End: About the Coup in Egypt
(translated from: wildcat, winter 2013/14: www.wildcat-www.de)

For two years, Tahrir Square was the symbol of a radical departure from social ossification and crisis. The military coup in the summer of 2013 ended this phase. The various illusions and hopes were buried with the hundreds that died. Essential parts of the liberal milieus have accepted state-led massacres and mass arrests in the name of ‘defending democracy’. The hope of a state solution to social misery is also lost; the last heirs of Nasserism and trade union movement-hopefuls now sit at the military (side) table. Their vague promises of reform are drowned out by their appeals to peace, order and willingness to work.

In the acute social situation there is currently no room for participation. The movement will have to provide new questions about social revolution and organisation and will have to find new answers. To this end, migrants play an important role. END_OF_DOCUMENT_TOKEN_TO_BE_REPLACED 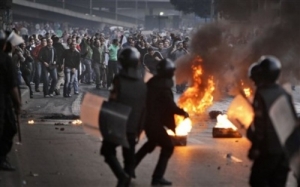 As Egyptians trickle into Tahrir to commemorate the 2011 revolution, hijacked by the army, it becomes ever more important to listen to the unheard voices.

On the morning of January 25, 2014 as people trickle into Tahrir Square, it is once again important to realize where we point our gaze to understand a bit of what is taking place in Egypt. A discourse of terror has scared many into supporting with blind faith a military leader who claims to be able to re-instate the good old days of stability. This discourse of fear also has the opposite effect and across the population there are those who are not falling for the terror trap. END_OF_DOCUMENT_TOKEN_TO_BE_REPLACED

EGYPT: Statement by Comrades from Cairo: We Don’t Need Permission to Protest

[The following statement was recently released by Comrades from Cairo]

We Don’t Need Permission to Protest!

To You at Whose Side We Struggle:

November 26 2013, we saw the first implementation of a new Egyptian law effectively banning any and all protest not approved and regulated by the Ministry of Interior. This is the same Interior Ministry whose soldiers have killed thousands of protesters, maimed tens of thousands and tortured unknown others in recent years. This security apparatus is acting with renewed arrogance since the July coup that returned the Egyptian Army to a position of direct authority. Around noon on November 26, riot police attacked a protest commemorating the murder of Gaber “Gika” Salah one year ago. Announcing that the protest was illegal, police fired water cannons and then baton-charged demonstrators, arresting several. Hours later, the ¨No Military Trials for Civilians¨ campaign organized a protest against the new anti-protest law as well as the inclusion of military trials for civilians in the constitution currently being drafted. This time, the police beat and arrested dozens, among them some of Egypt’s most renowned activists, the same people who fought the injustice and oppression of Mubarak, the SCAF, the Muslim Brotherhood, and now Abdel Fattah al Sisi and the puppet civilian government in place since the coup. END_OF_DOCUMENT_TOKEN_TO_BE_REPLACED

EGYPT: After long absence, revolutionaries return to the square

The absence of so-called “revolutionary” demonstrators from Tahrir Square has been apparent for some time. After some of their numbers helped depose former President Mohamed Morsi this summer, few returned to downtown Cairo after July 3. So why did they return in high numbers on Tuesday, the second anniversary of 2011’s brutal Mohamed Mahmoud clashes? END_OF_DOCUMENT_TOKEN_TO_BE_REPLACED 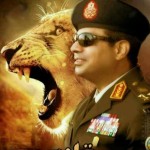 EGYPT: Libertarian Socialist Movement statement regarding 30 June: Tamarod and the call for June 30 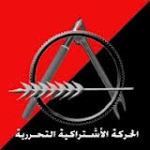 Nearly two years ago, people went down to the streets with millions opposing the former toppled pres. Mubarak, in a scene that shocked the whole society since this movement was spontaneous, and anti-politics. This enormous wave struck the aged, rotten political elite, the people felt for once they have the power to achieve something, rather than the reformist demands that kept repeating for ages by the elite and liberals, even the islamists. END_OF_DOCUMENT_TOKEN_TO_BE_REPLACED

EGYPT: The main enemy is the state

Egyptian strongman Gen. Abdul-Fattah el-Sisi is using the brutal repression of the Muslim Brotherhood to consolidate his grip on power, overshadowing the military-appointed civilian government and a commission charged with drafting a new constitution. END_OF_DOCUMENT_TOKEN_TO_BE_REPLACED

EGYPT: From Revolution to War on Terror: Reflections on Post-3 July Egypt 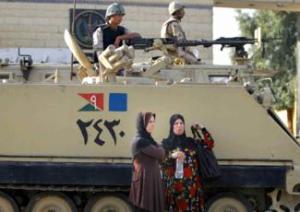 Two women wait near an armored army vehicle guarding Torah Prison, where ousted President Hosni Mubarak is held in Cairo, and expected to be released. Image by Amr Nabil via Associated Press.

There is no doubt that the toppling of President Mohamed Morsi on 3 July 2013 was a watershed event in Egyptian history. On the one hand, it demonstrated the continued possibility of mass collective action seeking political change through contentious rather than formal political channels. On the other hand, wittingly or not, it allowed the country’s armed forces to restructure the nature of its own longstanding domination of Egyptian politics and economics, both formal and informal. There is also the reality of a dramatic surge in polarization of Egyptian society, and a concomitant escalation in both state violence and that of non-state groups. END_OF_DOCUMENT_TOKEN_TO_BE_REPLACED 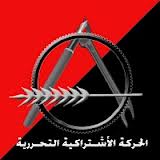