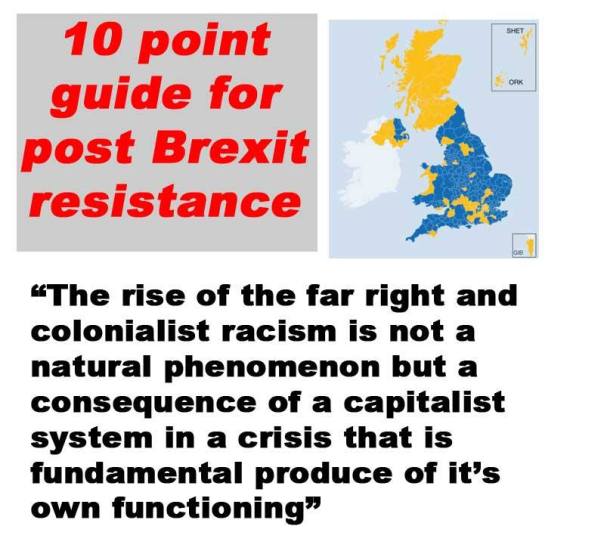 END_OF_DOCUMENT_TOKEN_TO_BE_REPLACED

FRANCE: Weekend of anti-fascist resistance in Calais, 5-7 September and Defence Of Migrant Squats 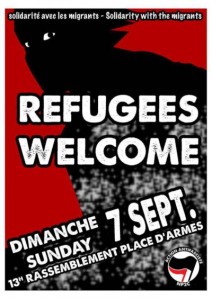 On Sunday 7 September, local fascist group ‘Sauvons Calais’ will once again try to hold a demonstration ‘against immigration’ in Calais, bringing in hardcore neo-nazis from across France. A number of high-profile fascists have already confirmed their presence including Thomas Joly (general secretary of Parti de la France), Yvan Benedetti (conseiller municipal of Vénissieux and former-member of the now banned organization L’Œuvre française), and Richard Roudier (of Réseau Identités). It is also likely that some neonazi gangs will arrive before and stay for more time after the demo to attack vulnerable people in the streets. END_OF_DOCUMENT_TOKEN_TO_BE_REPLACED

FRANCE: letter from the inhabitants of the squat fort Galoo

We are the refugees who squat this place and we are from different nationalities. We demand you not to use sadistic violence against us and not to make us go out of this place without any dignified solution.

We ran away from our countries because of injustice, war, dictatorship, ethnic cleansig, poverty, arbitrary imprisonment, religious persecution, theocracy which prevent us from believing in what we want : for example, in Sudan, if you drink a beer you can be whiped 40 times. We suffer from marginalisation in our countries because we fight the opression of our government and because of this we don’t have access to medical care, to school, we don’t have access to anything. END_OF_DOCUMENT_TOKEN_TO_BE_REPLACED

GERMANY: “We want our freedom!” Refugees resist in Berlin 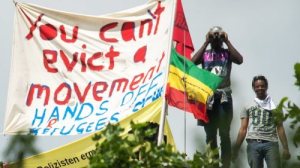 The resistance of a group of refugees against the eviction of an occupied school building in Berlin is exemplary of migrant struggles across Europe.

For eight days, a small group of about forty refugees from different but mostly African countries have been occupying the roof of a vacant school building in Berlin’s Kreuzberg neighborhood. The former Gerhart Hauptmann School on Ohlauer Strasse had been home to more than two hundred people since October last year, ever since a nationwide wave of refugee protests culminated in a six-hundred kilometer long protest march from the Bavarian town of Würzburg to the center of the country’s capital, Berlin. The refugees first set up camp at the central Oranienplatz, and later moved on to occupy the vacant school building where they were holding up, awaiting the slow processing of their asylum applications. END_OF_DOCUMENT_TOKEN_TO_BE_REPLACED

Human Trafficking in the Sinai: Refugees Between Life and Death

[Protesters outside the Eritrean embassy in Tel Aviv in March 2011. Image by Physicians for Human Rights via Flickr]

[The following report was published by Tilburg University and Europe External Policy Advisors on 26 September 2012.]

Human Trafficking in the Sinai: Refugees Between Life and Death

This report describes the horrific situation of trafficking of refugees in the Sinai Desert, a crisis that started in 2009. The refugees include men, women, children, and accompanying infants fleeing from already desperate circumstances in Eritrea, Ethiopia, and Sudan. An estimated ninety-five percent of the refugees held as hostages in the Sinai (also referred to as hostages) are Eritreans. Smuggled across borders by middlemen or kidnapped from refugee camps in Ethiopia and the Sudan as well as their surrounding areas, and then captured or sold, the refugees are held hostage close to the Israeli border in inhumane conditions and tortured for ransoms up to USD 50,000. A large number of the refugees have died, either while being held hostage or after their release – often even after their ransom has been paid. A large number of refugees simply “disappear,” killed while being held or shot by the Egyptian military guarding the border with Israel after release. END_OF_DOCUMENT_TOKEN_TO_BE_REPLACED