END_OF_DOCUMENT_TOKEN_TO_BE_REPLACED

The violence in Boukhalef, a quarter of Tangier in the North of Morocco, has reached a new dimension. Friday night, the 29th of August, a racist group armed with knives and bats attacked migrants and killed at least one person – a Senegalese – by cutting his throat with a knife, several others were badly injured and were brought to a hospital. Some of them are still in critical conditions. People talk about up to 3 more deaths which is not yet confirmed. END_OF_DOCUMENT_TOKEN_TO_BE_REPLACED

MOROCCO: You can arrest us but you can’t silence us: politically motivated arrests and detention in Morocco 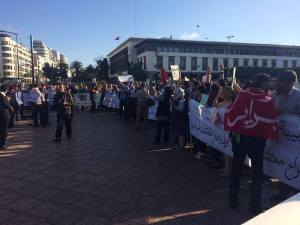 6 June 2014, Sit in calling for the release of political prisoners in Casablanca. Photo Via: @LeJebly

Morocco’s Arab Spring was short lived. The protest movement that emerged was somewhat pacified by the State with promises of reform and initiatives to tackle corruption and improve human rights. A new constitution was passed. These promises were mainly empty rhetoric and voices of dissent continue, and continue to be suppressed by the authorities. It’s estimated that around 300 are currently in Morocco’s prisons for voicing opposition to the regime.

Over the past three years activists from the 20 February Movement, a youth-led pro-democracy movement which emerged in Morocco as part of the regional uprisings, have been subject to arbitrary arrests, torture and even murdered by the State. But the movement was not silenced. END_OF_DOCUMENT_TOKEN_TO_BE_REPLACED

MOROCCO: Does Berber Federalism serve as an indigenous African model of Anarchist Federalism?

I wish to stress this point because the prefix does not mean the same thing.
If we said not capitalist, it is assumed that there is an alternative mode of production wherein capitalism and other possibilities that are open to the future of society. History is not linear; no societies are sentenced to spend their historical development via capitalism. END_OF_DOCUMENT_TOKEN_TO_BE_REPLACED

As the Arab Spring spread across several countries in the Middle East and North Africa, American philosopher Noam Chomsky argued that it did not originate in Tunisia, as is commonly understood. “In fact, the current wave of protests actually began last November in Western Sahara, which is under Moroccan rule, after a brutal invasion and occupation,” Chomsky stated. “The Moroccan forces came in, carried out – destroyed tent cities, a lot of killed and wounded and so on. And then it spread.”  END_OF_DOCUMENT_TOKEN_TO_BE_REPLACED

Does Berber Federalism serve as an indigenous African model of Anarchist Federalism?

END_OF_DOCUMENT_TOKEN_TO_BE_REPLACED

Seen from afar, Morocco’s 2011 events are the pitch-perfect tale of popular protests with a happy ending: after huge pro-democracy demonstrations broke out, the government complied without firing a bullet and a reformed Constitution was approved by popular referendum. END_OF_DOCUMENT_TOKEN_TO_BE_REPLACED

From Opposition to Puppet: Morocco’s Party of Justice and Development 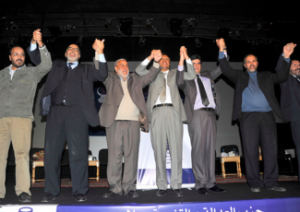 A protest repressed, a journalist beaten, an artist detained, a newspaper censored, and an activist tortured. Sixteen months after what was hailed as a “landmark” constitutional referendum, and exactly one year after a new government was elected, like a broken record, headlines from Morocco continue to repeat themselves. When the announcement for the 25 November 2011 parliamentary elections was made, the February 20 Movement and its supporters quickly agreed to boycott–a decision rooted in the prediction that the elections would bring about no real change. A year after the elections that gave the Party of Justice and Development (PJD) a majority win, the “path of reform” promised by the regime has yet to take off. Moreover, a combination of tax exemptions for the wealthy, food subsidies intended to prevent a popular uprising, and the disproportionate allocation of the state budget provide the outlines of an abysmal economic outlook for a country growing increasingly dependent on aid packages and International Monetary Fund loans.   END_OF_DOCUMENT_TOKEN_TO_BE_REPLACED

An Account from Young Moroccan Political Prisoners: Rape and Torture in Police Custody

[The following report was originally published in French on Mamfakinch on 2 September 2012. It was subsequently translated into English. Both the English translation and original French version appear below.]

Following the 22 July protest against the high cost of living and the increase in prices, which was violently repressed and disbursed by riot police, six activists from the February 20th Movement were arrested. Their names are Samir Bradelly, Abderrahman Assal, Tarek Rouchdi, Youssef Oubella, Nour Essalam Kartachi, and Laïla Nassimi (Laila is on temporary release). END_OF_DOCUMENT_TOKEN_TO_BE_REPLACED