← ITALY: RadioAzione – Considerations #5 (Making excuses and covering one’s arse: How not to be committed to anarchy)
Tahrir-ICN statement on events in Egypt → 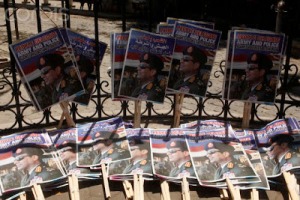 An old and pernicious idea is back in circulation since the July 3 coup. It was a running theme in the military ruler’s speech on July 24 where he demanded a popular mandate to “confront terrorism.” Right on cue, government officials parroted it repeatedly in their stern warnings to dissenters. Pro-military activists, politicians, and intellectuals happily invoked it in their jihad against the Ikhwan. The idea is haybat al-dawla, or the state’s standing and prestige, a central plank of the Arab authoritarian order that’s making a big comeback.

It’s unsurprising that in his July 24 speech, General Abdel Fattah El-Sisi would portray himself as a wise and honest mentor to the errant Mohamed Morsi. The twist is that he says Morsi didn’t understand the concept of the state because he’s an Islamist, not a nationalist (a claim Sisi repeats in his Washington Post interview). Sisi says he gave up on instructing Morsi and decided to “emphasize the idea of the state” to the judiciary, al-Azhar, the Coptic Church, the media, and public opinion, that is, all the institutions that supported the coup.

Right after the speech, the statist line was on everyone’s lips. The political adviser to the figurehead presidency asserted that the state is mandated to confront terrorism at any time, that the state and the people are in one camp, and that challenging haybat al-dawla in the streets is unacceptable.
The president’s media adviser added that El-Sisi’s call on citizens to demonstrate “is to protect the state and revolution.”
Abdel Latif al-Menawi, head of state TV under Mubarak, croaked that he’s been warning about the loss of state prestige since January 28, 2011.
Not to be outdone, civilian enthusiasts of military rule hopped on the bandwagon. Former presidential candidate Hamdeen Sabahy’s group called for more proactive measures to recover the state’s prestige. Activist Ahmed Douma said that he was heeding Sisi’s call to demonstrate “to support state institutions and get rid of all forms of terrorism.” The National Salvation Front practically begged the Interior Minister to disband the Ikhwan’s sit-ins, “to reinforce the principle of a state of laws and to preserve state prestige.”
Whether voiced out of conviction or rank opportunism, defending the state is the favorite ideological vehicle of Egyptian conservatives and counter-revolutionaries. Portraying the state as a sacred entity whose standing is forever under threat rules out any talk of state reform. But the really nefarious thing about haybat al-dawla is that it short-circuits any attempt to democratize the state, to open up its commanding heights to popular election and access. The implication is that the state can never change hands. It must always remain under the auspices of permanent custodians.
Superstitious Reverence
I don’t know when the term originated, but Arab state managers and their minions are obsessed with haybat al-dawla. Newspapers periodically run hand-wringing articles fretting about the decline of state prestige, especially after the 2011 uprisings. The term is a perfect mystification, casting an aura of mystery and gravitas on the reality of total political control: control over society by the state, and control of the state by an exclusive ruling caste. 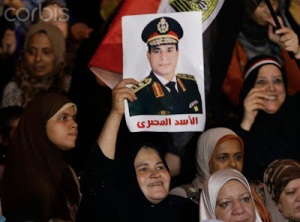 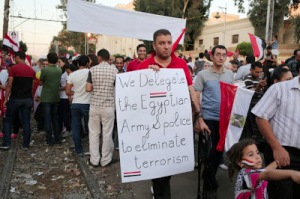 To me this is one of the most sobering lessons of the aborted Morsi presidency. The popularly-supported coup is quite a triumph for the Mubarakist ruling caste and the doctrine that the state is theirs to run. They can lay on thick the rhetoric of haybat al-dawla and restoring state standing, but what’s really been restored and re-legitimated is their complete control of the state.
Since the military leads the ruling caste, and sets the agenda and talking points for their civilian subordinates, political conflict is now cast as military conflict. Look no further than the military ruler’s discourse portraying resistance to his putsch as a battle between patriots and enemies. Oppositional sit-ins are threats to national security. Participants in the sit-ins are duped simpletons or paid agents. Their leaders are terrorists and killers. And any opposition to the military’s road map is a threat to state standing.
The challenges confronting the revolutionary project couldn’t be more daunting. It not only faces a reconstituted, militarized anti-revolutionary order, but a wicked ideology that naturalizes that order as a matter of state standing. State standing boils down to the prestige of the state’s hard core, military and police. And the revolution’s great promise of endowing citizens with full political standing is in abeyance.
Source: Baheyya

← ITALY: RadioAzione – Considerations #5 (Making excuses and covering one’s arse: How not to be committed to anarchy)
Tahrir-ICN statement on events in Egypt →