SPAIN: Spain’s Micro-Utopias: The 15M Movement and its Prototypes (Part 1)

“The old protests, so dull and single-minded, have passed into obsolescence, and given rise to infinite possibility. We’ve rethought the concepts of action, protest, relationship, the public, the common…”

In the collective text, This is Not a Demostration, we find a hidden corner of thoughtfulness completely ignored by mass media. This is Not a Demonstration isn’t an exercise in nostalgia. There’s no sense of longing for that Vibrant Mass that Occupied the Squares which formed that unpredictable collective body, the tangle of relationships some call “The 15-M Movement”.

Some of the media is too quick to bury “what’s left of 15M”. After the second anniversary protest of May 12th, which took place all across Spain, some will rush to hammer the final nail in 15M’s coffin. After the headcount, they’ll pick the photo with the sparsest crowd. They’ll even go so far as to manipulate some images, like any dictatorship would.

Alone in their cave, they’ll toast the funeral, reflected in the tarnished mirror of old-world media. They won’t see the details, the process, the steady drip. They will not take note. They will not listen. They will not read this text.

Surely, 15M is too complicated to be easily categorized, explained, translated. Besides, the eye sees what it’s used to seeing, as Amador Fernández-Savater reminds us in his highly recommended Seeing the Invisible: on Unicorns and the 15-M movement. But it might just be possible to catch a glimpse of its transformative power by describing the little things, the modest dreams, the collective projects, invisible to many. There´s no need for that utopia of May 68, that ridiculous “Beneath the paving stones, the beach” which never materialised. There´s no need for it because 15M has already built its own: dozens, hundreds, thousands of networked micro-utopias. 15M has no use for a utopian model because it already has one, hundreds, thousands, of working prototypes. Micro-utopian prototypes, connected amongst themselves and (almost) in real time.

Keyword: Prototype. “An early sample or model built to test a concept or process or to act as a thing to be replicated or learned from”. Digital culture, copyleft processes and the hacker ethic, so pervasive in the leadup to 15M, all imbued their spirit in this new revolution of the connected crowd. The working prototype, within this new, open, process-based world, replaces any fixed model. And 15M is still churning out prototypes. It has built them collectively, as a network and in an open way.

The initial Acampada Sol (encampment at Madrid’s Puerta del Sol square) wasn’t made up of groups protesting the collapse of the system. Within the encampments were prototypes for the new world. And the devil was in the details: its day-care centers, its open libraries, its food gardens, its video streaming, its analogue and digital mechanisms for proposing change. 15M – whether seen as a signal, a movement, a state of being or a set of human interactions – has built its prototypes, and they’re many: judicial, urban, cultural, economical, technological, communicative, political, affective.

The true power of 15M doesn’t lie in its (necessarily) reactionary collective defense of the welfare state. Its real, and massive, hidden strength is in its creative, innovative, proposal-oriented nature. Given our willfully blind politicians and media, increasing the visibility of these real, shareable, living prototypes is crucial, now more than ever. But it’s not a list we need, it´s more like an act of poetic justice. A subjective inventory, giving shape to something so big we don’t yet have a name for it.

As we’ve been saying for some time, being happy is our best revenge. 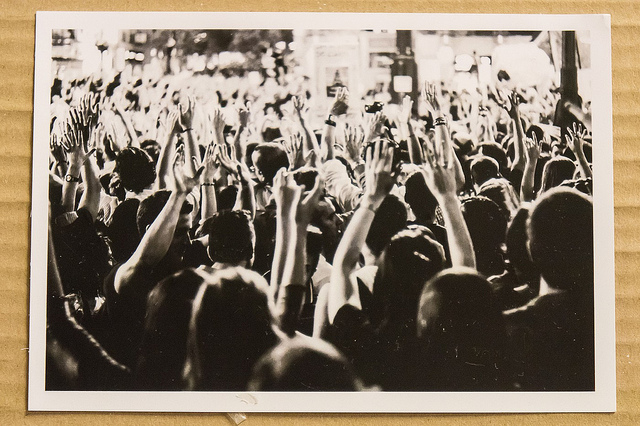 The encampments of 2011, specifically their restoration of community assemblies, took the political old guard by surprise. Here were non-hierarchical, open assemblies that anyone could take part in. For the first time in decades, we saw political assemblies held in public spaces. Assemblies that turned into method, human hardware for uniting urban citizens. The need for consensus arose from a spirit of dialogue and coexistence, born in reaction to the visceral antagonism of the old political class: we won’t go until we reach an agreement. Following the erosion of the mechanisms of consensus during the encampments, the strategy of geographical and thematic diaspora came into being. #TomaLosBarrios (#TakeTheHoods). #TomaLaPlaya (#TakeTheBeach). #TomaLoqueQuieras (#TakeWhateverYouWant. Join with others. Open it up. And, from the hardships of coexistence, the slow nature of consensus, from decentralization, the workings of autonomy emerged..

In free software jargon, “fork” describes a peaceful deviation within a common project. The term was quickly adopted in 15M citizen politics. The newly formed Comité Disperso (Scatttered Committee) sums up 15M’s fresh ways of dealing with an assortment of processes. “You can be there without always being there. You can be, without being the same. You can participate without needing to tie yourself to anything or giving up your autonomy. Acting from mutual respect, scattered organization allows varying degrees of collaboration amongst people and collectives, according to their own wishes, goals and abilities at any given moment”. It isn’t surprising then that Partido X, Partido del Futuro, which forked out from 15M, defines itself as “a method”.

The encampments led to a double mutation of urban space. First: the shift from public space into common space. Public squares, beset by excessive prohibitions and the privatization of their usage, were reborn as the urban commons. A leaderless, non-hierarchical citizen network organized this urban space “peer-to-peer”, consisting of interconnected public squares.

Second mutation: hybrid space. These weren’t squares made of paving stones. These squares were of bits and atoms. Analogue and digital life were intimately intertwined, inseparable. During the encampment at Sol, theTwittómetro connected networks and public squares, virtual and physical spaces. The #AbreTuWIFI, (#OpenYourWifi) campaign, which encourages people to open their home WI-FI access during protests to allow easy communication, nurtured this new hybrid urban space. Another good example is the #Voces25S map, created to protect mass groups from police violence. You only had to tweet from your GPS-activated mobile phone to lay out the “digital rug” over the physical city-space.

The first of the two mutations described above is building a network of former public spaces, now transformed into self-organising, self-governed places bristling with activity, like Madrid’s Campo de Cebada, recent winner of Ars Electronica’s prestigious Golden Nica Award in the Digital Communities category. These spaces are often supported in part by stale, dried up public institutions desperate for new ideas. The second mutation is branching out through Convoca!, a mobile app that allows you to check in at gatherings, protests, events or encampments. Both mutations coalesce in a melting pot of networked spaces, connecting peers locally and globally, beyond institutions or boundaries, on the fringes of commercial logic. 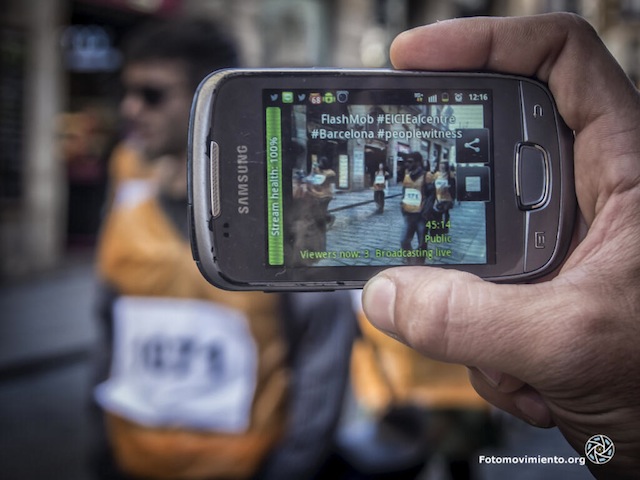 Very few countries have put into practice sociologist Manuel Castells’ concept of “mass self-communication” at the same level as Spain. Under the nose of a mass media trapped in its clichés and corporate compromises, 15M created an historically unparalleled system of mass communication. It introduced transparency as a method: video streaming of assemblies, open minutes and documents for every meeting, a transparency at once action and communication. From the get-go, 15M produced better live-streamed media of protests than anyone else. TV grew increasingly irrelevant when compared to on-the-ground video streaming as exemplified by People Witness or Toma La Tele. The revolution had finally been televised, contrary to Gil Scott Heron’s prediction (The Revolution will not be televised). What’s more, some written media, after seeing the global impact of SolTV and citizen-streaming, felt the need to catch up by aping the method and providing live video too.

A good number of photopress agencies lost some lustre to the explosive, poetic material showcased by FotoMovimiento. Meanwhile Audiovisol, Agora SolRadio or the printed-paper Periódico 15M have set the new standard in intelligent mass self-communication.

Some new media such as ElDiario.es, La Marea, Reset Project, Revista Números Rojos or Café amb Llet were born steeped in the micro-utopic communicative spirit of 15M. And if that wasn’t enough, let’s not forget 15M’s role as a global Twitter-trending-topic machine, planned on collective pads such as this one, and which are already being studied in the communication programs of universities worldwide.

Spanish, being a gender-based language, was hacked to be gender-flexible (from nosotros to nosotras) early on in the encampments. We started seeing men speaking very naturally in feminine/gender inclusive forms of speech, a hugely significant detail. It’s a symbolic mutation, a step onwards from competition to collaboration. This is the tip of the iceberg of a new worldwide paradigm. I’m not referring to it as a Feminine Micro-utopia, because this shift runs much deeper than that. At the very least, we’re witnessing a remix of classical feminism, which, at times, has constructed the same kinds of antagonistic and categorical walls as “machismo”. 15M is creating a grounded, intuitive outgrowth of Donna Haraway’s utopian cyberfeminism.

The existence of assemblies such TransMaricaBollo (composed of LGBT collectives in Madrid) is another example of the micro-utopian aggregate, inclusive and genre-transcendent, that 15M as a movement is striving for. While not being central to the movement, the Zorras Mutantes assembly, which plays with the queer movement, polyamory and the jargon of “cyborg-feminism”, is another spark within this #PostFeminist, #PostPatriarcal micro-utopia. Here’s an extract from their manifesto: “We’re animal-human-machine-software hacking the limits of established norms (…) We’re on strike, striking against species and gender: we renounce our binary gender and human categorizations, arbitrary classifications of an imperialist tradition (…) We abhor subject-object dualism, possessive individualism and the right to own property, and we declare ourselves as metabodies.”

Copyleft culture – conceived as a reaction to copyright – directlly influenced 15M. Copyleft idealism and its legitimization of copying and recycling content was at an all-time high in the months leading up to 15M, due to the threat of the antipiracy Sinde Law. These intuitive, collective and unplanned tenets formed the backbone of the #GlobalRevolution. Public squares acquired copyleft traits, becoming ctrl+v spaces constantly mirrored in their digital doppelgangers through texts on how to camp, how to videotape in a constant and unprecedented barrage of infectious creativity.

Born in the wake of 15M’s explosive appearance, Fundación Robo (or, “Steal this Foundation”), diluted the concept of individual authorship, churning out songs authored by the collective identity of Robo (Steal). Freely downloadable songs, under open licenses. Meanwhile, Asalto (Assault), Robo’s literary counterpart, was born soon afterwards, with its collective literature and poetic snippets remixed into intense “Collective Assaults”. And Plazas Invisibles (Invisible Squares), as written by Italo Calvino with the 99%. And VocesConFutura, visual shout-outs by inspired graphic creators camped within 15M pixellated environs. And Bookcamping.cc created to answer the innocent question, “what book would you take to the square?” With its book-filled shelves, its playlist of titles, its guided visits, Bookcamping.cc stands as a prime example of the new web-created and commons-oriented culture. But, it’s possible that 15M.cc, – a transmedia project composed of a book, a documentary and the 15Mpedia – may well be the best across-the-board representation of the collective, open and collaborative spirit of 15M’s cultural micro-utopia.

Remixing – A copies B, B recreates A’s original work – turns flaws into virtues. Remixing becomes an homage, a co-creation – and, why not, a battle cry. What could be better than #cutandpaste a fragment from “Asalto nº 4, Lorca remix” in support of Marea Verde and its defense of public education. “Green that I love you Green. Green wind. Green branches. Education needs your hand, to help avenge it, to expel those seeking the failure of the masses”.

Translated by Stacco Troncoso, edited by Ann Marie Utratil – Guerrilla Translation!
Original article at 20minutos.es.
This is a two-part article. The second part can be found here.

Posted on May 17, 2013, in Europe and tagged Civil movements, Direct Democracy, Spain. Bookmark the permalink. 2 Comments.